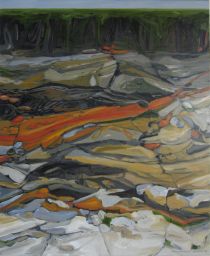 From the ongoing individual exhibition in the city of Middelkerke, one of the eight works from the theme 'Sedimentary Enigma' of Miriam Maes, moved to Ypres to join the collective exhibition NUCLE-ART 13. This exbition can be visited from May 16 until June 2 in the Cultural Centre of Ypres. The exhibition then travels to Neerpelt, Bastogne and back to Middelkerke on July, 20th.

NUCLE-ART 13, the city of Ieper and the campaign secretariat wants to put Mayors for Peace on the map, with the aim to raise awareness of such issues around Nuclear Weapons and Weapons of Mass Destruction.
In 33 cities and municipalities that are members of Mayors for Peace one or more artists created a work inspired by the theme of mass destruction, war and nuclear weapons.

NUCLE-ART is also a financial action in favor of the Mayors for Peace network. All 60 artists participating in NUCLE-ART have agreed to donate half of the profit of the sale of their work they have created in support of the campaign organised by Mayors for Peace. 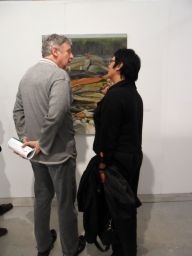